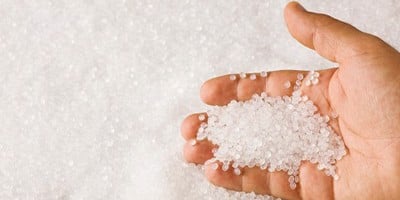 Polypropylene (PP), also known as polypropene, is a thermoplastic polymer used in a wide variety of applications. An addition polymer made from the monomer propylene, it can be produced in a variety of structures giving rise to a variety of applications including packaging and labeling, textiles, plastic parts and reusable containers of various types, laboratory equipment, automotive components, and medical devices. It is a white, mechanically rugged, and resistant to many chemical solvents, bases and acids.

In 2013, the global market for polypropylene was about 55 million tonnes. Polypropylene is the world's second-most widely produced synthetic plastic, after polyethylene.

The most common shaping technique is injection molding, which is used for parts such as cups, cutlery, vials, caps, containers, housewares, and automotive parts such as batteries. The related techniques of blow molding and injection-stretch blow molding are also used, which involve both extrusion and molding.

Polypropylene is used in the manufacturing piping systems; both ones concerned with high-purity and ones designed for strength and rigidity (e.g. those intended for use in potable plumbing, hydronic heating and cooling, and reclaimed water). This material is often chosen for its resistance to corrosion and chemical leaching, its resilience against most forms of physical damage, including impact and freezing, its environmental benefits, and its ability to be joined by heat fusion rather than gluing.